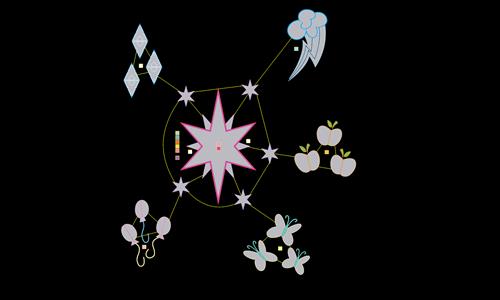 Krulle on 8/22/2013.
central bonuses unbalanced (too high).
Response by map creator Hankofficer on 8/26/2013
It was intentional. So people will race for the center. :)
1 out of 1 person found this review helpful.
Review by Nathan

on 9/26/2013.
Additional thought on this map - holding Star Point 6 is crucial to winning. Not only does it give you a 2-army bonus, but it is the only "safe" spot from which to threaten the center Star of Magic. In my first game I took the center but ignored SP6 - I won, but the game lasted nearly 50 turns. Next time around I took the center and focused on claiming SP6 as soon as possible, even though it meant sacrificing my 5-army bonus for holding one of the satellite regions. Once I had SP6, I could slowly build a defensive wall in the center, retake my home satellite and gradually capture the other inner star points. As a result, I locked down the Inner Stars bonus, which led easily to the 50-army Magic bonus. I won that game in half the number of turns.
0 out of 0 people found this review helpful.
Review by