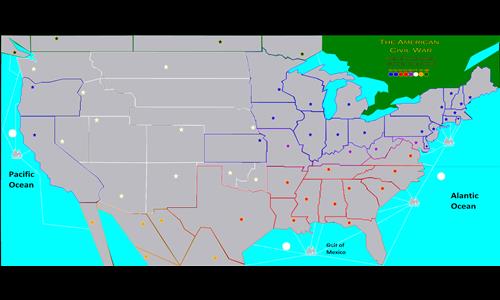 It is the years of the Civil War, for many previous decades; states has waged anger and hatred among others causing a great separation of the states dividing them between free and slave states. For preserving the Union, it is a long struggle that the only strongest may prevail. For the Confederacy, preserving their state's right is more important.

1.1: Changed Arizona and New Mexico territory in the perspective of the Union. Removed "mountains" due to people complaining of them as broken connections.

1.2: Fixed Arizona and New Mexico pathing problems. Included provinces of Canada and territories of Mexico to aid the Confederacy or the Union. Refixing all "underlapping" problem about being too split apart.