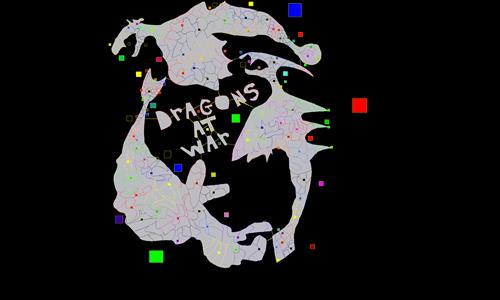 on 8/7/2013.
Fun map. There was a problem with the link between L11 and L10 though.
Response by map creator Despicable on 8/8/2013
I'm aware of this problem, I will fix the issue on the next version, thanks for your review.
- Despicable:)
5 out of 5 people found this review helpful.
Review by Nathan

Finally, and purely aesthetically, I wish that the territories had non-generic names. Even something like "Middle Lower Jaw" instead of "W149" would be an improvement.
Response by map creator Despicable on 8/8/2013
Thank you as well for your review, all issues will be fixed on the next version. Also I couldn't come up with 438 dragon part names(territories)i tried naming each differently, but my creativity quickly started to die after 40 territories only XD
- Despicable
3 out of 3 people found this review helpful.
Review by

Krulle on 8/23/2013.
By routes I like this map very much.
But....
I had problems attacking L11, as it always hid behind L10 and was not clickable (part of Lagathi Eye Bonus, right dragon). (I had to use the information window for bonus territories to attack L11 in L10 and to move my armies out again)
Same for part of the W46 territory, whch gets overlayered by W54.

And I missed a connection between L73 and L72.

Last one: Why are L16 and L17 part of the dragon bonus for Pythagen?

Otherwise, a slight balancing is needed, although the strong bonusses for controlling a complete dragon ensure a faster endgame....


Edit: oh, the issues have already been told, that happens if I play and not read the map info... ;)
Response by map creator Despicable on 8/29/2013
lol, yes i see the issues, i thought all connections were fixed, looks like people are seeing what i couldn't, like i said before, i'll fix issues on the next version, and thank you for your feedback
1 out of 1 person found this review helpful.
Review by Maggot Brain

on 11/9/2013.
This map has a lot of missing connections and overlapping territories. Needs a serious overhaul but I like the design.
Response by map creator Despicable on 1/28/2014
Thank, and sorry, I couldn't fix the map. I left warlight for a few months, and lost all my progress when i cleaned my computer, I will try to start again.
0 out of 0 people found this review helpful.
Review by antimatterfish on 9/25/2014.
Interesting territory shapes that make for good defense points but also make it annoying to take territories at the very many edges and then have to backtrack. At least one territory (near the head of the right dragon) is extremely tiny and hidden behind another much larger territory, so in order to actually take the territory and the bonus, you need to click the larger territory, then get info about bordering territories and click the hidden territory in the dialog.
0 out of 0 people found this review helpful.
Review by Andalorium on 9/16/2016.
the borders are really rough which most likely contributed to some connections that got missed like connections needed from L72
0 out of 0 people found this review helpful.