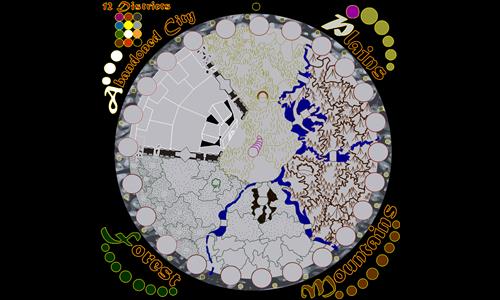 This map is designed to be a previous Hunger Games arena loosley based on a small U.S. city. The map features four distinct biomes, a city, Plains, Mountain, and Forest, and a hidden dragon. This map is a simplistic precursor to a larger more complicated 74th Hunger Games map which I've just started working on. This map works best for 24 player FFA or 12 players/teams in the district distribution, and it also includes a distribution for 6 player FFA.

I ran out of space for the rest of this description. You can read the thread for this map on the forums here for more info on balance and suggested settings: warlight.net/Forum/Thread?ThreadID=6371

Change Log:
0.1 - (Alpha Release)
0.11 - Added bonuses and gave the "rim" territories their actual names
0.2 - (Beta Release) Made a variety of aesthetic updates to the maps
0.21 - Made Borders more visible and edited the bonuses
0.3 - (Release Candidate) Fixed a few minor issues with the previous version
1.0 - (Public Release) Added the description and map details

on 7/29/2013.
Now, chances are you haven't played this map yet since it just came out, but I've been able to play a couple games. This will probably be a horrible review.

I love how this map works. It's like a normal Hunger Games arena, with different biomes and such. The hardest part is that you start next to two people immediately, and since it's such a small map, you don't get very much space, which makes it hard to fight and win. Even though I usually get destroyed, I still have fun trying to survive next to so many.

There are, of course, problems. This map is really only made for one type of game which only the author creates, so you won't see this up very often. The amount of armies you get from bonuses are also very low, so you don't get much flexibility with your armies.

And there are Easter Eggs.

I think this is a really good map, but don't expect to see it much.
6 out of 6 people found this review helpful.
Review by Nathan

on 8/1/2013.
It's a very interesting map. The bonuses are spread out, numerically small and incredibly difficult to both capture and defend. I do not recommend playing with the AI. Not only do the non-contiguous bonuses throw the computer for a loop, the majority of AI players generally defer to one or two, allowing those to become superpowers.

Personally, I did not enjoy playing on this map. Games go on too long with no real sense of progress. It felt like an excercise in futility. On the other hand, that may be exactly what the designer was going for - perhaps to capture the spirit of the Hunger Games (I assume, never having read the books or seen the movie).

Although I will not be playing this map again, I cannot say it is a bad map. Rather, it simply offers a playing experience I do not care for. I'm sure there are those who will enjoy it, however. God bless.
2 out of 2 people found this review helpful.
Review by Wayne Wohler