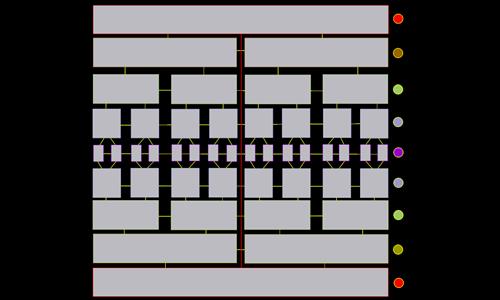 A very simple and fast paced map intended to be used for small FFA. I have included several distribution options for different numbers of players however the map bonuses work best for only 2 or 3 people, or single-player.

Bonus Note: Bonuses are intended for 1v1 and are designed to polarize the gameplay (obviously giving the advantage to the player who can reach tier 1). For 9-player FFA overriding the bonuses to Tier 1 - 13, Tier 2- 28, Tier 3- 52, Tier 4-98, and Tier 9- 112 should theoretically create balanced gameplay.

on 7/17/2013.
Only suitable for two-player games; use a distribution mode to ensure symmetric starting positions.

The bonuses are very unbalanced: the single territory at the top (or bottom) of the map with only two neighbours is worth just as much as the row of eight territories near the middle which needs to defend against twenty neighbours.