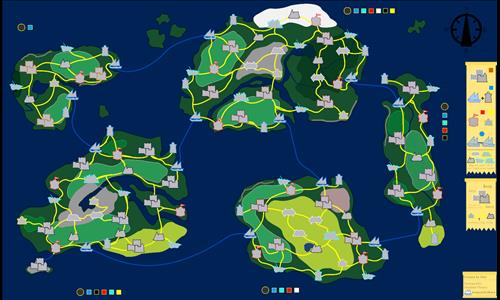 The Islands, a New Colonial War

After have conquered the continent, exporers found an island archipel in a far away ocean, where they settled themselves. But unfortunately the new barons are very angry and war is upcoming....

This map is also suitable for Local Deployment.
If you want to play with local deployment, disable all bonuses that start with;
Ghira, Benzaid, Naturka, Gelan and Belnios, and disable the secret trade route bonus.

If you have never played on this map or on 'The Continent - Early Colonial War' before, please read the the columns on the right to understand this map.

The bonus system is nice and easy: Local boni for castles, towns, temples, traderoutes etc. (explained to the right of the map) and boni spread over the island for collecting identical coloured places (see boni near each island). Once you understood it, it's fun.

But the four player distribution is very unbalanced yet.
The wildernes boni should be found near the island instead hidden at the border.
The 'Pirate Harbour' to shipwreck route should be visible or deleted.
Response by map creator jonathan pietjes on 10/5/2015
In v2.0 the southern Island will be more balanced.
2 out of 2 people found this review helpful.
Review by Nathan

on 9/25/2015.
Not sure how I missed rating this map. It's a lot of fun and much more manageable for players that liked the feel of the huge Continent map but don't have days and days to spend playing.

Watch out - those bonuses stack up fast.

My only complaint is the unmarked connection between Captain Goldfish's Shipwreck and Pirate Harbor. Is that intentionally linked? If so it should be indicated on the map.
Response by map creator jonathan pietjes on 10/5/2015
The connection between Captain Goldfish's Shipwrec and Pirate Harbor was intentionally linked. In v2.0 it won't be anymore.
1 out of 1 person found this review helpful.
Review by

on 12/10/2014.
How did this get passed? Some connection errors in the South. Weird bonuses.
1 out of 2 people found this review helpful.
Review by

on 12/10/2014.
bonuses dont make any god damned sense; theyre too far apart, and if the writing on the right of the map is to be believed, then there are bonuses not visible?

on 9/1/2015.
Unclear bonuses and starting spots aren't very fair
0 out of 0 people found this review helpful.
Review by