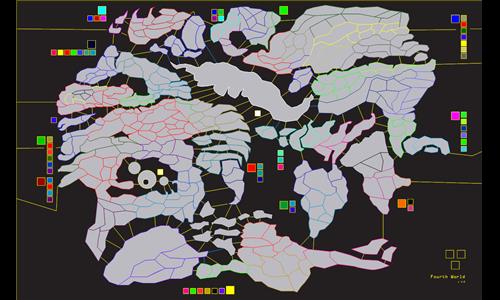 Release Note:
Still under balance testing.
-------------------------------------
A map that offers balanced territorty selection with a main battle ground to draw everyone into the fight. There are litte to no places where a player can simpy back up into a corner and sit. All territories have multiple attack points.

When playing this map, please make it a rule with your opponents and teammates that no-one starts at the Apex, the large single territory that sits in the middle of the map. Best gameplay should result from everyone picking a corner and moving inwards. However that's entirly up to you. Please, enjoy the map!

on 7/3/2013.
Nice layout. I know you were going for balanced play and therefore used bonus territories that were not themselves balanced, e.g., Patriot (3 armies for 10 territories) vs. Atlantus (3 armies for 4 territories). Nevertheless, I feel the map is unfairly slanted in favor of the southeast.

I used your suggestion and started a four corners game. I started in the southeast - where there generally are more bonus armies for each territory - and facerolled my way to victory.

Also, the AI is notoriously bad at handling territories with negative bonuses. Rather than make the Apex a -2 army territory, why not make it a wasteland with 100 armies so that it is not immediately available to any player?
Response by map creator Samuel on 7/3/2013
Thanks for the input. I will take all comments into consideration. I have to be honest and say that most of the bad Bonuses as you described, was lazyness to making extra bonus boxes. Simply because we wanted to try it out as soon as possible and I am using Illustrator to make the map. And a few times Ive had it forget all the territory names so I was scared to modify the actual file. Regardless, I will get that fixed asap. Thanks for the input
1 out of 1 person found this review helpful.
Review by

QueefBalls on 6/3/2015.
If you suffer from anxiety, stay away from the big island in the middle. That's the most extreme example, but most territories on this map have far too many connections. The only positive thing I can say is that it brought all of my teammates a little closer together as we rallied together to win just so we would never have to look at this piece of dog shit again.